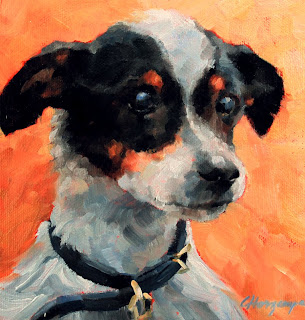 This is a little homeless dog that was found tied to the inside of a trash can in Poland. A wonderful woman named Ori has a rescue home for homeless cats and dogs that have been abandoned, abused or found in the forests of Poland. Not only does she find homes for them but she takes beautiful pictures of them and has given me permission to paint from her photos.

Okruszek, which means crumb in Polish, is a fitting name for him since he was thrown in the trash like nothing other than a piece of crumb. He is an old dog with health problems but will be taken care of by kind caregivers to enjoy his last days with good food, medicine and a warm bed.

My granddaughter fell in love with this painting so I plan to surprise her with it for her birthday next week.

This painting has been submitted to the DPW Challenge on Color sponsored by Carol Marine.


Update: On April 28th Ori (the woman in Poland that rescued Okruszek) wrote this on her blog about Okruszek (Crumb):

We had him for three weeks and three days.
I guess I have never met anyone who would be at the bottom of this misery, so incredibly battered by fate, so lonely and helpless.
We tried for three weeks to give him as much love as he should get through his long life. We believed, or rather, I naively believed that in this way manage to outwit the disease, banish it from the Heavens and bargain a few months.
Crumb rewarded us well-being and attempt to return to health, but the forces he was able to very briefly.
He died as someone very dear, important, deplorable as Someone's dog, nestling, farewell, and was buried with great respect.

(This has been translated from Polish to English by Google Translate)
Posted by Carol Horzempa 15 comments: 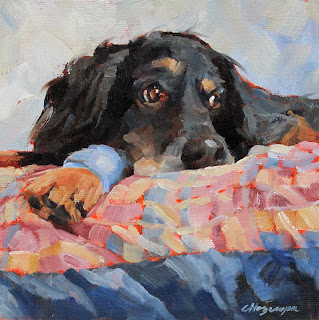 I decided to paint from the same photo that I used for a painting I did two years ago called "Blue Day." I wanted to experiment with the "one color per stroke" method in this painting. I have found myself painting this way ever since I entered Carol Marine's "One Color per Stroke Challenge" on the Daily Paintworks website.

I am really hooked on this method of painting! You have to think about values and color before each stroke but it's fun and I find my paintings look fresher. Of course I did break a couple of rules by using a smaller brush in places and forgetting to squint.

When I took the photo of Shawna, she was laid up with a torn dewclaw and had to spend the day indoors with a bandage on her leg. She looked so sad and worried in the photo that I just couldn't resist painting her the first time and a second time with a little thicker paint.

This is the second painting I've entered in Carol Marine's challenge. Be sure to check the over 200 entries here.

Carol Horzempa
Pewaukee, WI, United States
I will always consider myself a student constantly learning and experimenting. For the past few years I have focused on improving my skills on painting a variety of subjects. Thank you for visiting my blog. All paintings are for sale unless otherwise noted.